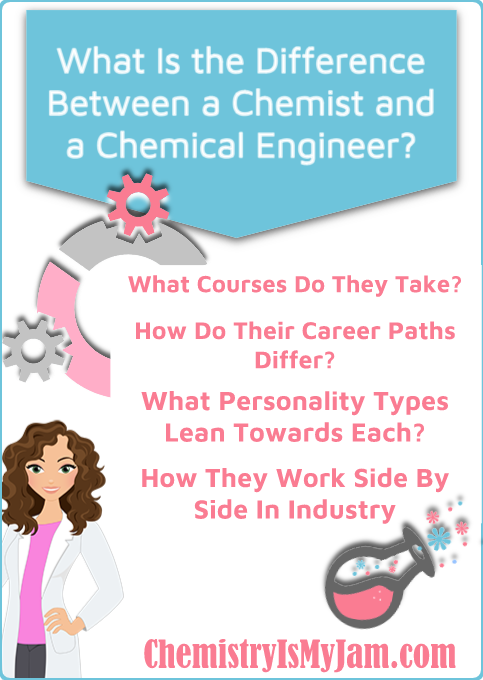 As a chemical engineer who now teaches chemistry, I am often asked what the difference is between a chemist and a chemical engineer? They both have something to do with chemistry so they must be the same – right? Not quite. I am going to tackle this question from a few angles to try to clarify these two great career paths. We will look at:

What Courses Do Chemists and Chemical Engineers Take?

The best way to compare the career paths of the chemist versus the chemical engineer is to compare the education they receive. I turned to a top rated engineering school – North Carolina State University – for a comparison. Pulling up the semester by semester course of study for their BS in Chemistry and BS in Chemical Engineering programs gave me the information I needed. Here is a summary of the courses involved for these two fields: 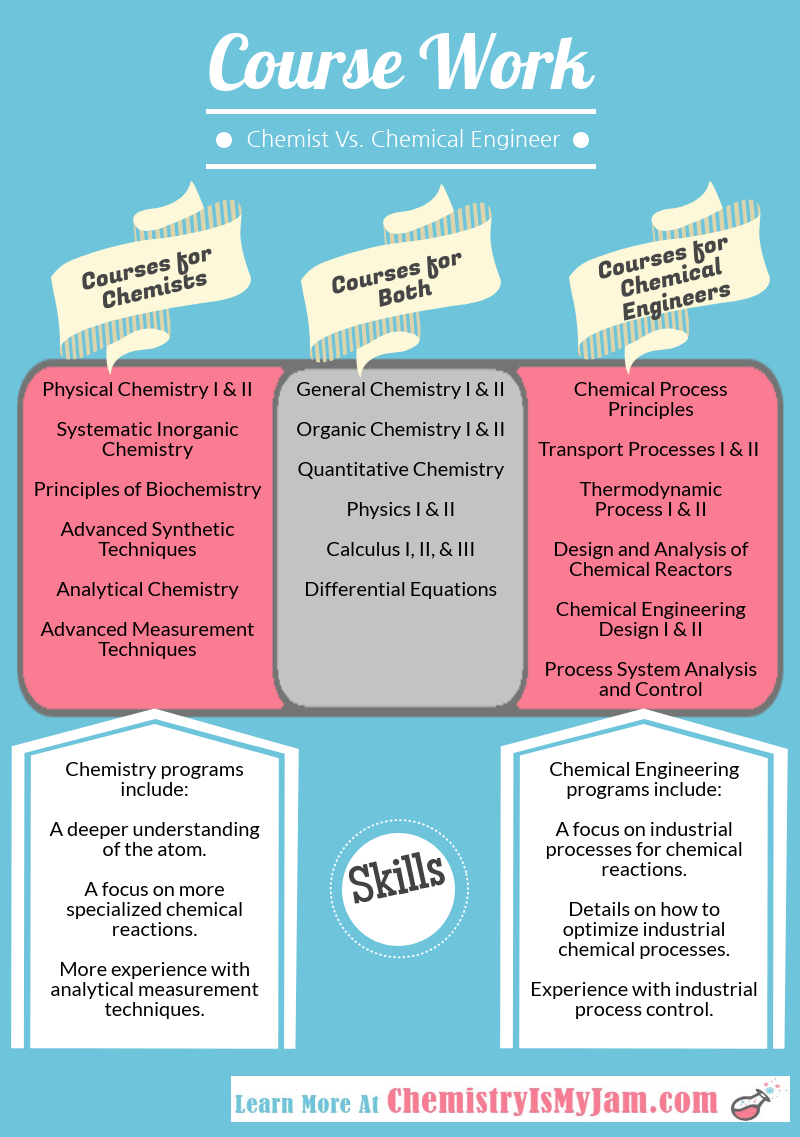 Their paths begin to diverge by the ocasional course in the sophomore year and then go very different directions for the junior and senior years.

The chemist will go on to gain a much deeper understanding of physics of the atom. They will dive deeply into the theoretical side of their field and how to research it. An entire course is dedicated to analytical chemistry, meaning the instrumentation that separates, measures, and identifies chemical compounds.

The chemical engineer is not as likely to need a deep understanding of the theories of the nucleus. Instead, they will need courses that prepare them to take the work of the chemist and apply it in an industrial setting.

The chemical engineer will focus on how to design systems that will transfer fluids, maintain temperatures, mix materials, manage pH, and produce the desired products on a large scale.

Think of it this way:  in many cases the work of the chemist is on a smaller scale in a lab setting. The chemical engineer takes the processes developed by the chemist and scales them up to the level of mass production. Both of these are incredibly important roles!

How Do Careers Compare for Chemists and Chemical Engineers?

Before we jump too deeply into careers, I want to make a small disclaimer. This information is based totally on generalities. Both chemistry and chemical engineering are competitive fields that can follow some amazing career paths. Whichever path you chose, you’ll have an awesome degree. The world is your oyster!

I’ll speculate a bit on why there is such a large difference. Part of it is due to who they go to work for. The chemist data is going to be skewed by the fact that many chemists go to work in research. Research sometimes gets a bad rap because people relate it to repetitiveness, but research is crucial to your way of life! The problem is that in some cases research is grant funded and unable to pay the big bucks. Chemical engineers, on the other hand, usually go to work for companies – companies who are producing products and bringing in profits. Companies who can afford to pay the big bucks. There are absolutely exceptions to this, but be aware that this skews the salary data.

Another aspect to consider is the nature of the job. In many cases, chemists are sometimes in laboratory environments. This offers some level of consistency to their schedules. Chemical engineers are often working on a team that is producing a product. These are processes that run around the clock and are not always kind to a person’s personal schedule. This is an inconvenience that they are compensated for by an increase in salary. 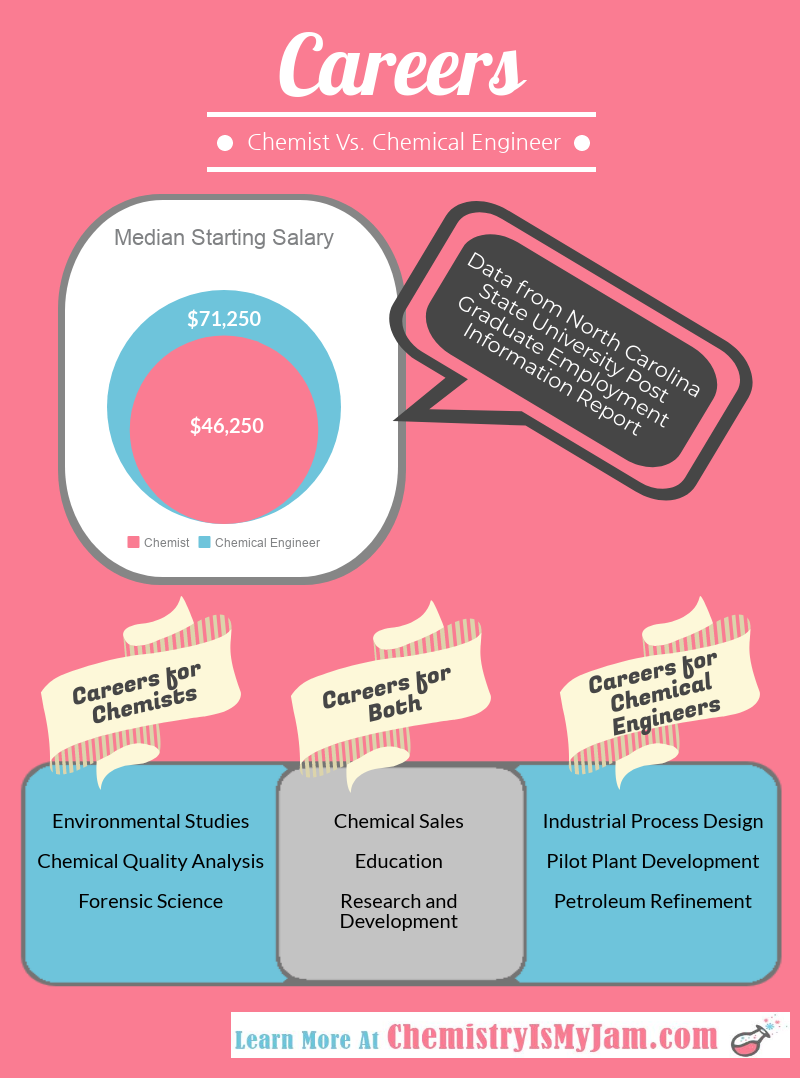 There are many careers that are very appropriate for both the chemist and the chemical engineer. Both would find a comfortable home in chemical sales or education. Research is often associated more with the chemist, but there are plenty of research fields where a chemical engineer could offer valuable insight.

(Remember…still speaking in generalities.) There are some fields that tend to be more suited for the chemist. Environmental studies, product quality analysis, and forensic science are good examples. The chemical engineer, however, is more likely to find a career in industrial process design, pilot plant development, and petroleum refinement.

In industrial settings, chemists and chemical engineers often work side by side to carry out different, but equally important roles. Consider the case of a company trying to develop a new chemical product. The initial reaction sequence would likely be developed in a laboratory environment by a chemist. The chemist would determine the best temperature conditions, the ideal solvent for the reaction, how to maximize the kinetics of the reaction, and how to drive the equilibrium of the reaction as far towards the products as possible.

As the desired products are produced, the chemist would run analytical tests to determine their purity and make suggestions for how to improve it’s quality. The chemical engineer would respond to these suggestions by trying different scenarios in the pilot plant. This is the scientific method in action! This process is repeated over and over until optimum conditions are achieved.

This represents one scenario where chemists and chemical engineers work together. In reality, this is often a team of people each playing different roles in the process.

I’m going to start off with another disclaimer. These are total generalities! If what you’ve read above about the life of a chemist appeals to you and you enjoy the subject, I say go for it!

The chemist often finds themselves in a laboratory environment. This brings some level of predictability to their schedule which many people appreciate. The life of a chemist often appeals to organized people who enjoy a consistent routine and don’t mind working alone or in small groups.

Can you picture yourself in a cute lab coat with comfy closed toed shoes, a pair of safety goggles, and a pony tail. This is not uncommon attire for a chemist.

What Personality Type Might Enjoy Being A Chemical Engineer?

Chemical engineers often find themselves in industrial environments, which can be a bit dirtier and more unpredictable than a lab. The day to day life of a chemical engineer is going to depend on the reliability of the process they are working on. Some days are quiet as they attempt to tweak a beautifully running process. Other days are total chaos with broken ball bearings, chemical leaks, and failing pumps. This might appeal more to people who enjoy working in teams and don’t mind a wrench being occasionally tossed into their routine.

Can you picture yourself in khakis, steel toed boots, safety goggles, ear plugs, and a hard hat? This is what an average day looks like for many chemical engineers.

What Did You Decide?

Two amazing career paths, each with their own set of challenges and rewards. Which one appeals to you? I’d love to hear about it in the comments or through one of my social media channels!

Stay connected and get all the latest

« What Does My Final Exam Grade Have To Be?
Spice Up Boring Topics With Student Made Videos »

As an Amazon Associate I earn from qualifying purchases.

Search for a Topic

Stay up to date

Rebecca Williams (ChemistryIsMyJam) is a participant in the Amazon Services LLC Associates Program, an affiliate advertising program designed to provide a means for sites to earn advertising fees by advertising and linking to Amazon.com.

This error message is only visible to WordPress admins

This website uses cookies to improve your experience while you navigate through the website. Out of these, the cookies that are categorized as necessary are stored on your browser as they are essential for the working of basic functionalities of the website. We also use third-party cookies that help us analyze and understand how you use this website. These cookies will be stored in your browser only with your consent. You also have the option to opt-out of these cookies. But opting out of some of these cookies may affect your browsing experience.
Necessary Always Enabled
Necessary cookies are absolutely essential for the website to function properly. This category only includes cookies that ensures basic functionalities and security features of the website. These cookies do not store any personal information.
Non-necessary
Any cookies that may not be particularly necessary for the website to function and is used specifically to collect user personal data via analytics, ads, other embedded contents are termed as non-necessary cookies. It is mandatory to procure user consent prior to running these cookies on your website.
SAVE & ACCEPT
396 shares