You may have seen that the winner of the 2020 Miss America Pageant, Miss Camille Schrier, performed a science experiment for her talent. She carried out a large version of the Elephant Toothpaste demonstration in a dramatic, fun display that won over the crowd, the judges, scores of bloggers, and the vast majority of the chemistry teachers I interact with.

The experiment itself is the catalyzed decomposition of hydrogen peroxide to produce oxygen. The production of oxygen itself is not that exciting to watch, but throw in some dish soap and food coloring and it is suddenly quite entertaining. The soap catches the oxygen and produces a fun, fast display of tiny bubbles.

I’m in several online chemistry groups and forums for teachers. For the most part my fellow chemistry teachers were excited to see their craft on such a large stage. A few pointed out that her heels were not very practical for the lab. I have to agree, but I’m going to let her slide because, well…Miss America! She did sport the lab coat, safety glasses, and gloves. I’ve had trouble finding a picture of the offensive shoes, so I’m going to tell myself that they were closed toe.

The comment that interested me the most was that her performance was not really a talent. After all, chemistry teachers across the globe use this demonstration. Directions for it are all over the internet, and there is even a version using household products available. This comment really got me thinking. 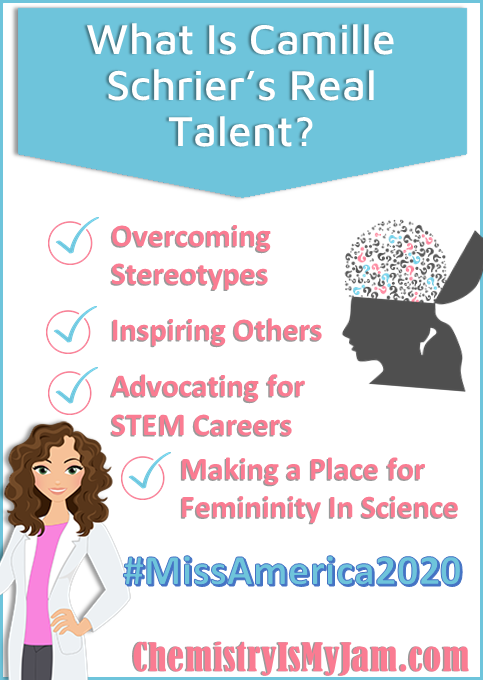 Her talent goes beyond being able to follow some simple directions for a lab experiment. After all, she has degrees in Biochemistry and Systems Biology. The experiment she put on stage was likely one of the more rudimentary science tasks she has performed lately.

The real talent of Miss Camille Shrier is serving as an ambassador for STEM fields. Not just any ambassador, but one who does not fit the typical stereotype.

We have been telling girls for years that there is a place for them in the STEM world, but in the process we have created a new stereotype for what the female scientist looks like. She is often nerdy and fits in as one of the guys. (I can say that because I embraced my inner nerd a long time ago).

What about the more feminine among us? The ones who can actually walk in heels, understand things like how to contour their makeup, and can pull off a Dutch braid? I think it is time we welcome them into the world of STEM also. Television shows have done a good job of making the female scientist sexy and alluring, but I rarely see them include the girl who is naturally feminine. She has a right to like science too.

Allow me to introduce you to one of my best friends from college – Suzie. We were both double majoring in Chemical Engineering and Paper Science & Engineering. Suzie was, and still is, beautiful inside and out. Femininity isn’t something she strives for – it is part of who she is. Yet she is still smart and still likes science.

As part of our major, we toured an industrial facility during our Freshman year. Suzie, like the rest of us, had on steel toed boots, safety glasses, a hard hat, ear plugs, and a button down shirt. She made no effort to stand out. She just happens to be naturally more graceful than most of us.

An older man who was one of the operators at the facility struck up a conversation with Suzie. It was a mostly friendly conversation but it ended with this comment: “Darlin’, if you want to wear bows in your hair and heels, this ain’t for you.”

Suzie didn’t have bows in her hair. She was called out for being naturally feminine and given the impression that she didn’t belong. The fellow likely went about his day patting himself on the back for making conversation with the young whipper snappers – but in reality he reinforced a stereotype that needs to go.

Suzie went on to graduate with honors from a competitive, scientific, mostly male dominated field. She is resilient and was able to brush off the comment.

But what about the others? The ones who would have taken the seed of doubt that this man planted and run with it – far away from the STEM field they dreamed of.

The world of STEM is a better place because there are people like Suzie in it. It is time we start making them feel welcome from the get-go.

Stay connected and get all the latest

As an Amazon Associate I earn from qualifying purchases.

Search for a Topic

Stay up to date

Rebecca Williams (ChemistryIsMyJam) is a participant in the Amazon Services LLC Associates Program, an affiliate advertising program designed to provide a means for sites to earn advertising fees by advertising and linking to Amazon.com.

This error message is only visible to WordPress admins

This website uses cookies to improve your experience while you navigate through the website. Out of these, the cookies that are categorized as necessary are stored on your browser as they are essential for the working of basic functionalities of the website. We also use third-party cookies that help us analyze and understand how you use this website. These cookies will be stored in your browser only with your consent. You also have the option to opt-out of these cookies. But opting out of some of these cookies may affect your browsing experience.
Necessary Always Enabled
Necessary cookies are absolutely essential for the website to function properly. This category only includes cookies that ensures basic functionalities and security features of the website. These cookies do not store any personal information.
Non-necessary
Any cookies that may not be particularly necessary for the website to function and is used specifically to collect user personal data via analytics, ads, other embedded contents are termed as non-necessary cookies. It is mandatory to procure user consent prior to running these cookies on your website.
SAVE & ACCEPT
289 shares